The illegal geoengineering projects over the United States of America have sparked an international ban, congressional report, and a recent petition to Congress to arrest geoengineering participants; who have admittedly violated chemical terrorism laws, waged chemical and biological warfare against the United States, and have made billions of dollars from their “carbon credit” scheme.

For the serial killers / mass murderers at NASA, DARPA, LLNL, and other participating organizations, their “popularity contest” is nothing more than a climate cult with a lack of followers. Their desperation to promote mass murder as a “savior” of earth against a 1-degree rise in temperature (that they cannot prove) – is nearly as weak as their self-fulfilling prophecy of the climate cult itself.

For the followers who think that they will somehow be spared for supporting child killers, in the climate cult that is similar to that of an unbiased Jonestown experiment (also ran by the CIA), I wish you the best of luck.

May a prosecutor find you all guilty as charged, and may America not meet the fate that David Keith so seeks.

Biological and chemical terrorism will not be permitted here. Let’s help these “spray pollution for global warming” mad scientists to understand that they cannot kill children to “prevent a 1-degree rise in temperature” that “they cannot prove” with “a program that began in 1923” but now “has a new excuse” called “carbon dioxide” – which, by the way, originated from the master of geoengineering herself, NASA (Charged Aerosol Release Experiment).

If Leatherface in the Texas Chainsaw Massacre got away with torturing and murdering multiple people, and they made a movie about him, let’s call the new one “The Armstrong/Wallops/Pinal Airpark Sulfur Dioxide Massacre,” where 60,000 people die per day from air pollution.

Sign the petition now to end this mentally-ill climate cult’s takeover of their doomsday cult of self-fulfilling prophecy.

I say, if you want geoengineering, climate cult members, go buy your own little island and sniffle all of the “smart dust” for “global warming” that you like. See how it works out for you, and you’ll be the next news story. As for us normal people who don’t like being raped in the olfactory orifice, leave us alone.

Is that too hard for the geoengineers to understand? Obviously. What did we expect from a group of serial killers? Anyone up for a 6th mass extinction caused by sulfur dioxide? Don’t arrest a geoengineer, and see what happens.

You see, Dorothy from the “Wizard of Oz” no longer has to follow a yellow-brick road to find the “man behind the curtain” or the “wicked witch of the west” who destroyed her home with a manufactured tornado.

I just gave names and addresses of every location and person on this website. The drone operators’ names themselves (and flight patterns) can be obtained through a FOIA information request.

If you would like to donate to this website to support the costs of operation, please either click on an ad or purchase this material on paperback or Kindle: 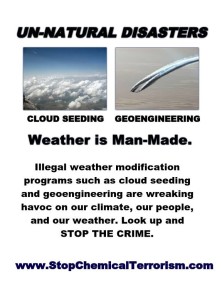